We have cover in this article are following

VueJS is a progressive JavaScript framework which is used to develop interactive web interfaces. Vue js is more focus on the view part, which is the front end Design. It is simply to integrate than other frameworks and libraries. The installation of VueJS is fairly simple and beginners can simply to understand and start design their own user interfaces. The content is separate into several chapters that hold related topics with simple and useful examples. 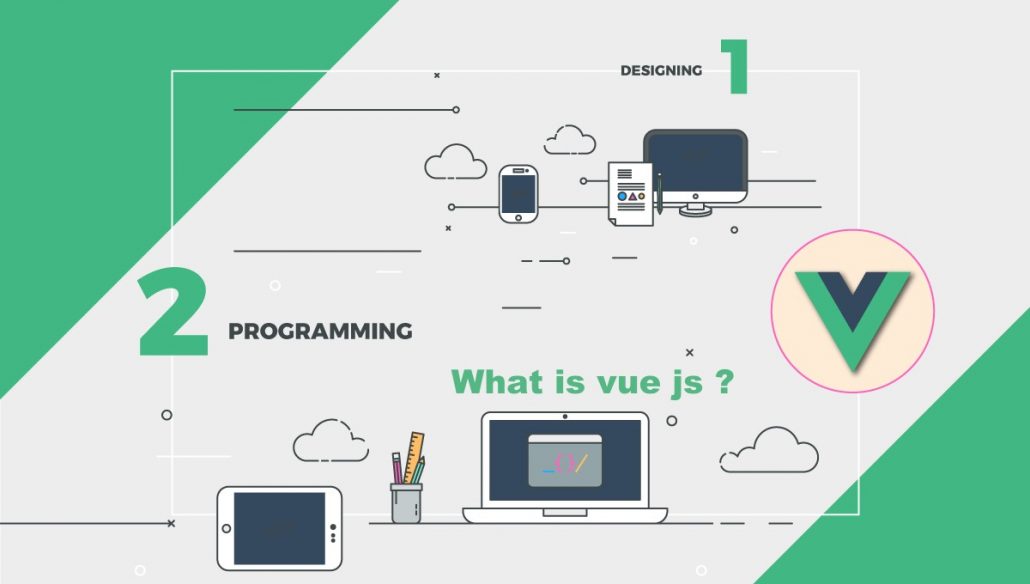 Every VueJS application has its own state but managing it easily and predictably can be hard. There are many perspective to state management in modern front-end development and it’s simply to get lost in all the available patterns and libraries.The core library is focused on the view layer only and is easy to pick up and integrate with other libraries or existing projects.

On the other hand , Vue is  perfectly capable of powering sophisticated single- page applications. Progressive framework is a framework that you can insert into your design as you feel need for it.

Differently of other javascript framework like angular , that since the beginning , you need a full project make in angular, follow the” angular rules”

This implies you need to learn a lot of things to start programming with angular.

Released in 2010 by Google. It is a typescript based javascript framework. It was released prior to the other two Javascript frameworks that we are
discussing in this blog. Today it is called Angular but before 2016 there was a suffix ‘JS’ to its name.

JS was dropped from its name after the release of Angular 2+. On 28 May’2019, its latest version, Angular 8.0.0 was released. Google and Wix are among the most popular companies using Angular. learn angular js tutorial in hindi on main website

A progressive Javascript framework released in 2014 and developed by no big name like React and Angular. In fact, it was created by an ex-engineer of Google, Evan You. It is gaining constant popularity. Its latest version; Version 2.6.10 was released on 20 March 2019.

It is the youngest member of the family of Javascript frameworks. It has practically removed the drawbacks of the other frameworks to offer ease
of next level to software developers. Websites like GitLab and Alibaba are using Vue.

There is a thing called DOM which can be understood as UI, that is the user interface of your application. The DOM changes whenever you update the
user interface. This represents the changes that are made in the application.

It can be used in two ways, either as virtual DOM or a real DOM. The performance of the framework/library is highly affected by them. Let’s see what is used by Angular vs React vs Vue 2019 to understand their level of performance:

This framework of Javascript uses real DOM. It is extremely hard to handle because if you lose the flow, you will have to go deep into the codes to
actually find out the issue. It is time-consuming, and risky to attract a lot of bugs.

The real DOM use by Angular affects its performance and ability to make dynamic software application. Furthermore, it results in the slow performance of this Javascript framework.

Vue has taken all the good attributes of frameworks launched before it. With the same concept, Vue is using Virtual DOM as an adopted concept of
React. This ensures faster and bug-free performance.

P.S.  Although many developers find problem while working with virtual DOM of React and Vue. They do not find it efficient enough to choose over Real DOM.

4. Angular vs Vue: Top Use Cases

Javascript is embraced by top-notch companies to develop their products. The best software development services are revolving around the Javascript frameworks heavily. These three frameworks and libraries are utilized by various organizations like Google and Facebook.

Let’s have a look at some well-known names that are using Angular vs vue:

Angular has a strong community base with backing from top companies like Facebook and Google. But still, vue is popular in the open-source community.

It was introduced by the renowned market-leader Google. Moreover, the organization uses this Javascript framework for its Google Adwords
applications. This adds to the authenticity of Angular which provides it strong community support since its launch.

Unlike Angular vs React, Vue is not backed by any top-level corporate. This should have resulted in lesser popularity but in reality, this
Javascript framework gained amazing popularity in the open source community.

In a nutshell, Angular, Vue framework and libraries in a descending order according to their sizes are:

Now let’s understand the impact of these framework sizes on the software development projects of your business:

Angular has a lot to offer to its developers from templates to testing utilities. This obviously needs space which makes it size big. This makes it unsuitable for the light-weight applications.

It is the smallest of other frameworks and libraries that we are discussing in this blog. Hence, extremely suitable for the development
of lightweight applications. If you require a library that is smaller than Vue then you must choose Preact.

The ability of the users to write codes in a particular programming language is known as its learning curve. When it comes to Angular vs Vue then angular takes a backfoot in comparison to the other two.

This is because the Vue and React do not require to hire web developers who are proficient in typescript. But among these two, Vue has an upper hand as it is considered more friendly by the developers.

According to the statistics provided by the Stateofjs research, Vue scored more than angular when the respondents were asked: “used it, would use again”. There were many options given to the developers to choose which were treated as the parameters for comparison.

Here are their parameters and the result of the votes by developers are represented in the graph below:

As you can see, the Vue got the maximum votes for the option of “heard of it, would like to learn.” it clearly shows a bright learning curve for this library of JS in future. Along with this, the graph is a crystal representation of diminishing popularity of Angular.

Angular vs React vs Vue: Flexibility

Angular- offers everything you need but not much flexible, Vue- not much opinionated or flexible.

It offers everything from routing to templates. You do not have to move to any other tool to develop your applications. This can be good or bad
according to your perspective.

It has opinions on how to structure an application. You do not get to or you do not need to select routing libraries. You can just start with the coding process with everything provided in the Angular package.

The Vue framework is as bare-bones as react framework. But Vue ecosystem on its official website has a lot to offer to its developers. Some of the add ons are Vue Router for routing and for state management there is Vuex.

After reading and researching in-depth about Angular, react and Vue, we can conclude these four things:

Angular is highly opinionated and unlike Vue and React, it offers everything
from routing, templates to testing utilities in its package.

Vue is the most popular, loved and growing framework of Javascript.

Want to join the discussion?
Feel free to contribute!

How to save data in react js ?.
Scroll to top